Press - CFO Selections in the News 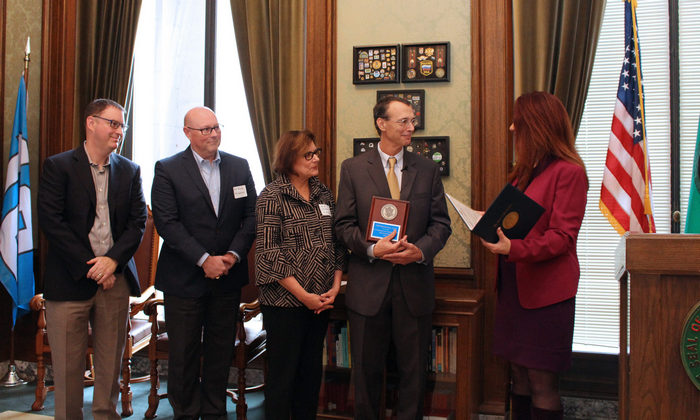 On Monday, December 4, Secretary of State Kim Wyman presented five businesses with a National Association of Secretaries of State Medallion Award during a ceremony in her office.

The award recognizes those who contribute via civic engagement, voter education efforts, government services, and a commitment to giving back to the community.

Watch the video as Kim Wyman presents the award to a few of our CFO Selections team.

“Washington is blessed to have so many caring companies that give back to their communities in a variety of ways…” says Secretary Wyman.

CFO Selections® Executive Manager, Kevin Briscoe remarked: “It is a tremendous honor to be recognized with such an impressive list of corporations.” He notes, “The CFOS Foundation is celebrating its 10th Anniversary this year and its work continues to reflect the spirit of philanthropy and giving our entire organization embodies.”

During the Dec. 4 ceremony, other nominees received honor roll certificates for their community efforts. CFO Selections was honored to be recognized with a Medallion Award along with:

The Corporations for Communities program began in 2009 as a way to recognize exceptional Washington businesses that demonstrate a commitment to giving in order to improve local or regional social and environmental conditions. The program is run by the Corporations & Charities Division, which is part of the Office of Secretary of State.

CFO Selections provides finance and accounting fractional and interim consulting, as well as executive search services to a wide range of business and non-profit organizations. Established in 2002, the company focuses on locating and recruiting the highest caliber senior-level talent available. Its team of consulting CFOs and Controllers work in a collaborative and problem-solving way to generate maximum results.